The snow has arrived! The British Larder is covered in a blanket of snow and it feels as if the whole world came to a stand still. The very busy A1152 which is a 60 mile per hour road has ground to a halt!

With more snow on its way we are trying to be positive. Snow means that the British Larder is quiet, but as the saying goes, it’s onwards and upwards. So we are making the most of the quiet time by scraping the car park and clearing up the snow so that our customers can park and still visit, stoking the roaring wood burning fire, and finally, cooking up a storm in the kitchen.

This Iron Bark Pumpkin and Chestnut Soup is the perfect remedy for frosty hands and rosy cold cheeks.

David the Village Veg man brought these Iron Bark Pumpkins during November and the beginning of December, and we have been saving them to ripen. 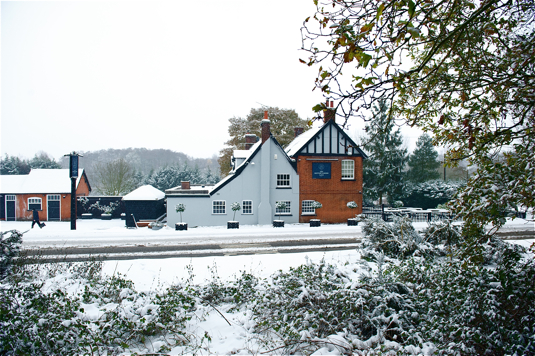 Well we must have had the feeling that they would come in handy when it gets really cold. Pumpkins and most squashes are good for storing, as when stored, they become riper and ultimately sweeter in taste. We try to use the whole pumpkin including the seeds and skin if it’s thin and tender enough, but if it’s a bit tough it usually requires peeling. The seeds make a lovely crisp and nutritious garnish. The chestnuts came from the nearby Rendelsham Forest. We picked them up from the forest floor, roasted and peeled them and the fresh nuts were frozen for a rainy …well… snowy day!

Heat a large saucepan and melt the butter. Add the diced pumpkin to the melted butter with the ras-el-hanout and a small amount of salt and freshly cracked black pepper.

Add the cheese and half of the chestnuts to the soup and cook for a further 10 minutes.

Blend the soup until very smooth. Pass the soup through a sieve, taste the soup and adjust the seasoning and thickness if needed.

Wash the pumpkin seeds and remove as much of the pumpkin membrane as possible. Mix the seeds with the rest of the ingredients, season with salt and spread onto a baking tray. Roast the seeds in the oven, starting with 5 minutes, stir and continue with nominations of 5 minutes until the seeds are golden. Let the seeds cool completely - once cold they will crisp.

Serve the boiling hot soup with a few drops of pumpkin oil, the candied pumpkin seeds, a sprinkle of sumac and use a micro plane to grate the remaining roasted chestnuts over the soup.