There is no raw meat and no baking involved. It’s a fairly simple recipe and I’m sure you would have tried something similar at one or other stage of your life.

The only difference is the novel serving suggestion and then the name of course.

A few years ago my boss brought chocolate salami back from Portugal. I thought it was wonderful, very clever and something I had not seen before.

The flavour and ingredients reminded me of a treat that my mum used to make for me when I was a child. So I thought why not use that old recipe and give it a gently face-lift.

A year ago I bought a old fashioned meat-safe that Ross’s dad had carefully restored for us, I use this meat-safe to display my novel chocolaty salami in, it makes people smile!

It’s a brilliant talking point after dinner, when you bring out the chopping board and carving knife and let the diners help themselves to a slice of chocolate salami with their coffees.

The chocolate salami idea and recipe was a great hit with a lot of regular British Larder readers. All credit for this video goes to Helene now blogging from her kitchen at https://ThermomixBimby.com based in Canada. 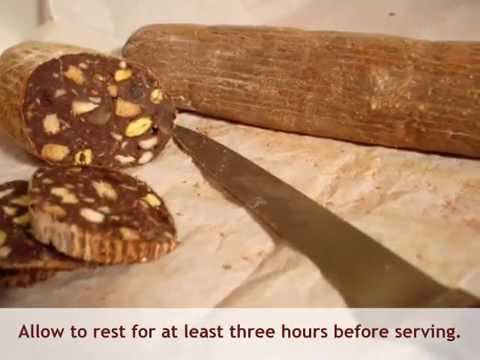 Crush the Biscuits into small pieces, but not crumbs. Add the almonds, cranberries and pistachios and sprinkle half of the port wine over the mixture, set aside.

Put the chocolate and butter in a metal bowl, place over a pot of boiling water, allow to melt.

Once the chocolate is melted add the icing sugar, salt, egg yolks, the rest of the port wine, vanilla and the condensed milk, mix well and continue cooking over the bain-marie for a further 4 minutes to cook the eggs, stir regularly. Let the mixture cool for 10 - 15 minute, as it starts to thicken and it's easier to work with.

Shape in to a salami shape with a double layer of cling film. Let the salami set in the fridge.

Remove the cling film and then roll the salami in cocoa powder. Its now ready to serve and I like to wrap it again in the paper and tie it with string to mimic a classic salami.

Crush the Biscuits into small pieces, but not crumbs. Add the almonds, cranberries and pistachios and sprinkle half of the port wine over the mixture, set aside.

Remove the salami at least one hour before serving from the fridge.
This is a great item to serve as a petit four with coffee. Let the guests cut their own slice, somewhat unusual but a great talking point! Also makes a great home made present.